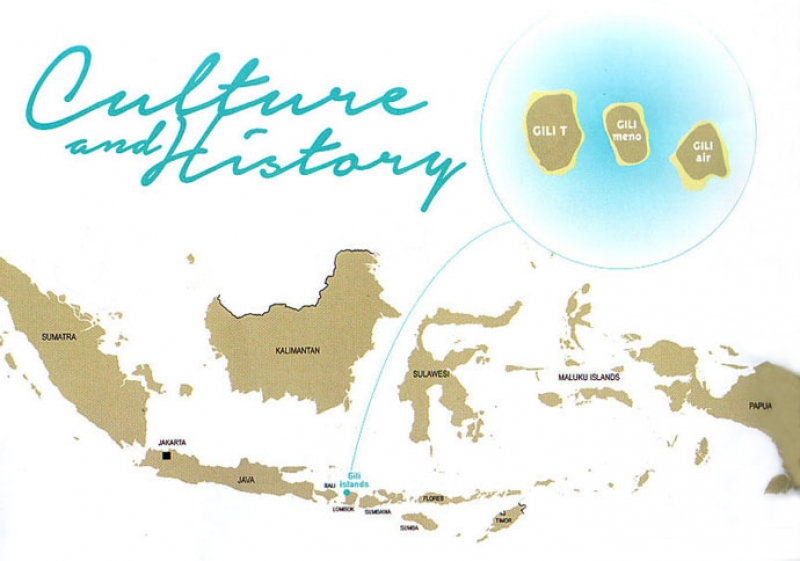 2664 Views
The three Gili Islands, composed of GiIi Trawangan, Gili Meno and GiIi Air are located off the northwest coast of Lombok. In Sasak language, "gili" means “small island. " There are more than 30 Gilis around Lombok but Trawangan, Meno and Air are by far the most frequently visited. Because of their proximity to the equator, they have a tropical climate thnoughout the year with an average air temperature of 28C and water temperatures ranging from 26 to 29C. The rainy season runs From November to April and the dry season from May to October. The Bilis bathe in the Bali Sea, at the convergence of the Indian and Paciﬁc Oceans and enjoy a drier micro-climate than the rest of Indonesia due in part to the fact that they are situated between two great voIcanoes- Mount Rinjani on Lombok and Mount Agung on Bali. Like the majority of the Lombok community, the inhabitants of the Gili Islands are primarily Muslim and each island has a mosque[s] emitting sounds of live prayer five times daily. Bahasa Indonesia is the national language spoken that unites all of the country’s islands but Gili locals speak Sasak Gili Air which is slightly different to Sasak Lombok. About 200 years ago, fishermen from Sulawesi of Makassar, Bugis and Mandar ethnicities arrived on the Gili Islands. They began to settle temporarily because of the abundance of fish in the sea and the presence of fresh water on Gili Air and at that time, sectioning off a bit of land with string was enough to claim it. These otherwise nomadic people began to settle in the Gilis and cultivate the land, planting peanuts, tapioca and corn whilst continuing their tradition of fishing. They sold and exchanged their produce in the markets of Lombok and also traded portions of their land for livestock, rice and other much needed items not native to the Islands. Coconut palms are indigenous to the Gilis while mango, banana and papaya trees have been introduced over the years.

The first Western traveler to set foot on the Gili islands came in 1984 to Gili Air. By the mid 1990's Bali had gained International recognition as a travel destination and the Gilis began to he known as an off-the-beaten-track paradise escape. Today, the Gili Islands are ﬂourishing and are attracting all types of visitors from every corner of the globe.

Over time, the people of the Gili Islands have adapted to a multitude of changes and cultural immersions but have managed to maintain their cultural identity. Historically the people here have seen their days of hardship when during WWII, Lombok and the Gili islands were occupied by Japanese forces. The islands were used to contain prisoners of war and the locals endured forced labour. A hill situated on the south of Trawangan was used as a lookout post and today remnants of the bunker still remain. Trawangan derived it's name from the Indonesian word "terowongan" meaning "tunnels" of which a network were dug by the occupying forces. The holes have since been filled in.